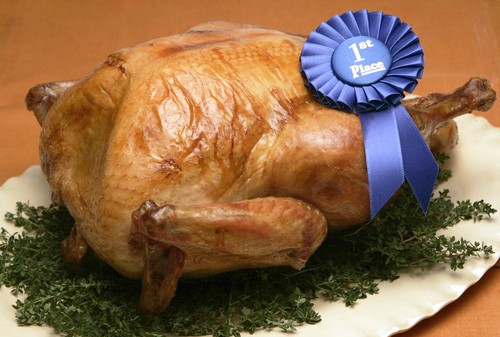 If you’ve not ever brined a turkey, you’ve got to try it this year.

I’m giving you lots of time to prepare for this one. I love doing this and can take no credit for the method. I got it straight from the LA Times 3 years ago. It’s amazingly wow!

Note: This is more a technique than a recipe. It makes a bird that has concentrated turkey flavor and fine, firm flesh and that is delicious as it is. But you can add other flavors as you wish. Minced rosemary would be a nice finishing addition. Or brush the bird lightly with butter before roasting.

1. Wash the turkey inside and out, pat it dry and weigh it. Measure 1 tablespoon of salt into a bowl for every 5 pounds the turkey weighs (for a 15-pound turkey, you’d have 3 tablespoons).

2. Sprinkle the inside of the turkey lightly with salt. Place the turkey on its back and salt the breasts, concentrating the salt in the center, where the meat is thickest. You’ll probably use a little more than a tablespoon. It should look liberally seasoned, but not over-salted.

3. Turn the turkey on one side and sprinkle the entire side with salt, concentrating on the thigh. You should use a little less than a tablespoon. Flip the turkey over and do the same with the opposite side.

4. Place the turkey in a 2 1/2 -gallon sealable plastic bag, press out the air and seal tightly. Place the turkey breast-side up in the refrigerator. Chill for 3 days, turning it onto its breast for the last day.

5. Remove the turkey from the bag. There should be no salt visible on the surface and the skin should be moist but not wet. Place the turkey breast-side up on a plate and refrigerate uncovered for at least 8 hours.

6. On the day it is to be cooked, remove the turkey from the refrigerator and leave it at room temperature at least 1 hour. Preheat the oven to 425 degrees.

7. Place the turkey breast-side down on a roasting rack in a roasting pan; put it in the oven. After 30 minutes, remove the pan from the oven and carefully turn the turkey over so the breast is facing up (it’s easiest to do this by hand, using kitchen towels or oven mitts).

8. Reduce the oven temperature to 325 degrees, return the turkey to the oven and roast until a thermometer inserted in the deepest part of the thigh, but not touching the bone, reads 165 degrees, about 2 3/4 hours total roasting.

9. Remove the turkey from the oven, transfer it to a warm platter or carving board; tent loosely with foil. Let stand at least 30 minutes to let the juices redistribute through the meat. Carve and serve.

The dry-brining technique for preparing roast chicken named for chef Judy Rogers of San Francisco’s Zuni Café in San Francisco can turn your Thanksgiving meal into something special.

We’ve been writing about dry-brining turkeys for three Thanksgivings now and the response from readers has been overwhelming. Most say it’s the best turkey they’ve ever made. But there are always some lingering questions. Here are answers to some of those most frequently asked. If you’ve got one that’s not covered here, drop me a line at russ.parsons@latimes.com and we’ll add it to this list:

How did the turkey get its name? The “Judy Bird” is named for famed chef Judy Rodgers of Zuni Café in San Francisco. It was inspired by her method for preparing roast chicken, which is legendary among food lovers.

How much salt should I use? We tried various ratios, and 1 tablespoon per every 5 pounds of turkey turned out to be the best. Plus, it’s easy to remember. Therefore, a 15-pound turkey will take 3 tablespoons, a 20-pound turkey will take a quarter cup, and so on. For weights in between, estimate and round down — you’ll be fine; this is not rocket science.

What kind of salt? That’s a very good question, because different salts have different flake sizes and so have different volume measurements. I use Diamond Crystal kosher salt. Other coarse salts will be close, but if you’re using finely ground salt, reduce the amount used to 2 teaspoons per every five pounds. I’m sorry, that’s harder to remember.

How does brining work? Without getting all Mr. Science-y: During cooking, the protein strands in muscles tighten, squeezing out liquid. The salt in a brine solution changes the chemistry of the protein in a way that allows it to retain more moisture during cooking.

How is dry-brining different than normal brining? Normal brining requires soaking the bird in a salt-water solution. While it does keep the turkey flavorful and moist, the added liquid makes the meat a little spongy. With dry-brining, the salt pulls moisture from the bird, which is then reabsorbed, so you get the flavor and moistness without any added water, improving the texture.

Do I need to do the full 3 1/2 days of brining, or can I shorten it? You can shorten it, though the brining won’t be as effective. You’ll need to watch the internal temperature more carefully. The final half day of drying is optional as well; if you’re pressed for time, just pat the skin thoroughly dry with a paper towel.

Can I use a kosher turkey? Yes. Though koshering does involve salting, it’s only for a very brief time, just long enough to remove any traces of blood in order to comply with religious dictates. There is little to no appreciable effect on flavor.

Can I use a frozen turkey? Yes, see this year’s story. We experimented with this last year and found that salting a frozen turkey and letting it defrost and brine at the same time works just fine. Just rinse the bird in cool running water to start the defrosting (and to un-freeze the bag of giblets inside enough that you can pull them out). Pat the bird dry with a paper towel and you’re ready to go.

Can I use an already brined turkey? No, that’ll simply be too salty. If you’ve already bought it, save the recipe for next year.

Can I use just the turkey breast? Yes, simply allow the appropriate amount of salt for the weight. Since most turkey breast halves weigh 2 1/2 to 3 pounds, you should use about 2 teaspoons of salt.

What kind of bag should I use? Any sealable plastic bag will work. You’ll need one that will hold about 2 1/2 gallons. Grocery stores usually start stocking these at the holidays and I’ve found Smart & Final to be a fairly reliable source. Note: This is also a perfect size for stowing clothes when you travel and for putting away your sweaters in the spring. Just remember to set one aside for Thanksgiving.

I’ve always used my mom’s recipe for roast turkey; can I adapt that to use dry-brining? Yes. Simply dry-brine the turkey as described above, and then eliminate any salt from any further seasoning and cook according to your mom’s recipe. If you want a treat, incorporate some of her seasonings into the salt for the dry brining (measure the amount of salt, then grind it with the seasonings). You’ll find the flavoring penetrates the meat this way.

It’s only been a day, but there’s some moisture in the bag, should I worry? No. The salt pulls moisture from the turkey, but almost all of it will be reabsorbed. That’s the way this thing works. If you’re using a frozen turkey, there may even be a little moisture in the bag at the end of the brining.

Does dry-brined turkey taste salty? No, it merely tastes well-seasoned. You only use a little more salt than you normally would, and because the salt is absorbed into the meat rather than sitting on the surface, the saltiness is mitigated.

Can I make gravy from the pan-drippings? Yes. While the pan drippings from wet brining are usually too salty for gravy, that is not the case with dry brining.

Can I stuff a dry-brined turkey? Yes, though a warning is necessary: In order for stuffing to be safe, the U.S. Department of Agriculture says it must be heated to a temperature of 160 degrees at the center. By the time the stuffing reaches that temperature, the breast meat will almost certainly be above 170 degrees. Even dry-brined birds will begin to dry out at that point. But if you have always stuffed your turkey, dry-brining won’t affect it.

Speaking of food safety, I notice that you call for a final temperature for the turkey of 165 degrees, but some of my cookbooks and my meat thermometer call for 180 degrees. Until last year, the called for a final internal temperature of 180 degrees for turkey. But salmonella (the great health threat with poultry) is dead after 30 seconds at 160 degrees. When contacted about the change last year, no one at the agency was able to recall how the higher number had been reached in the first place. 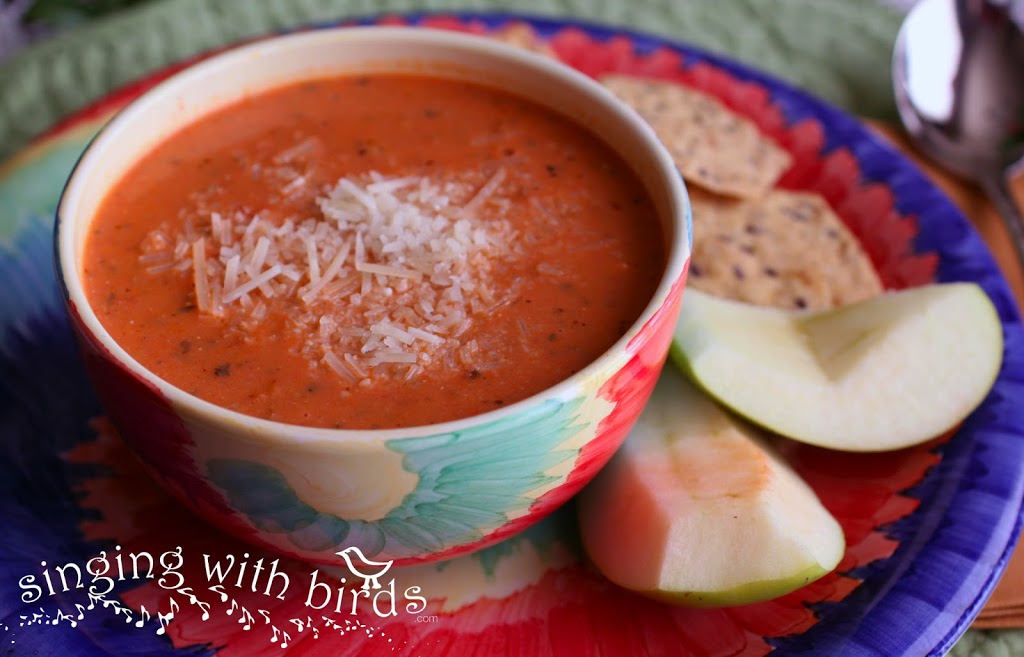 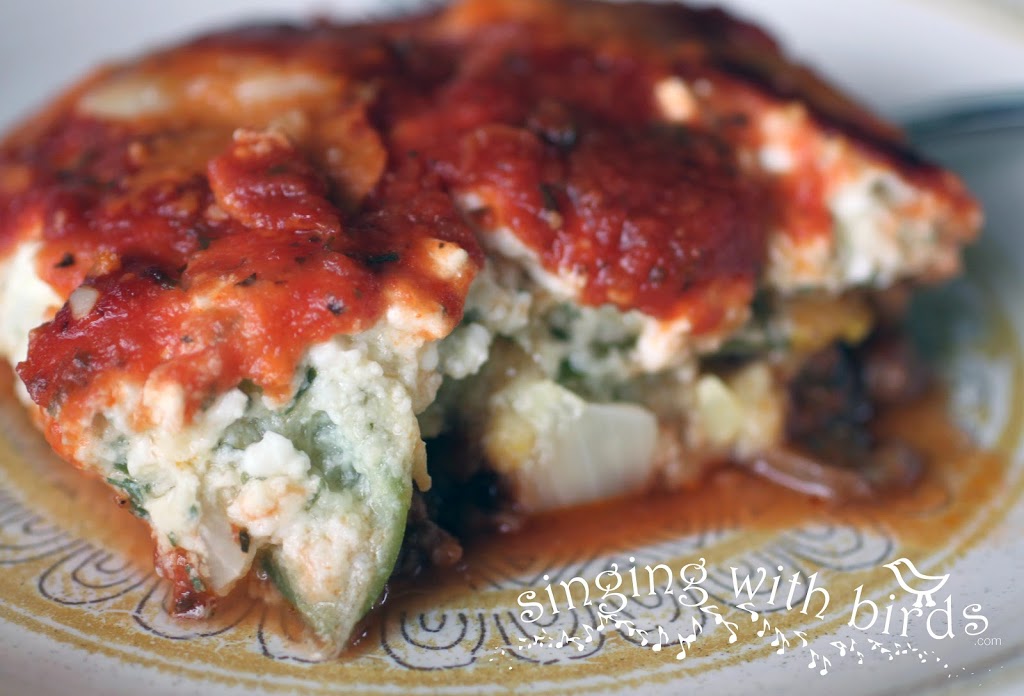