Cruising Thru 40 Years Together, Part 2 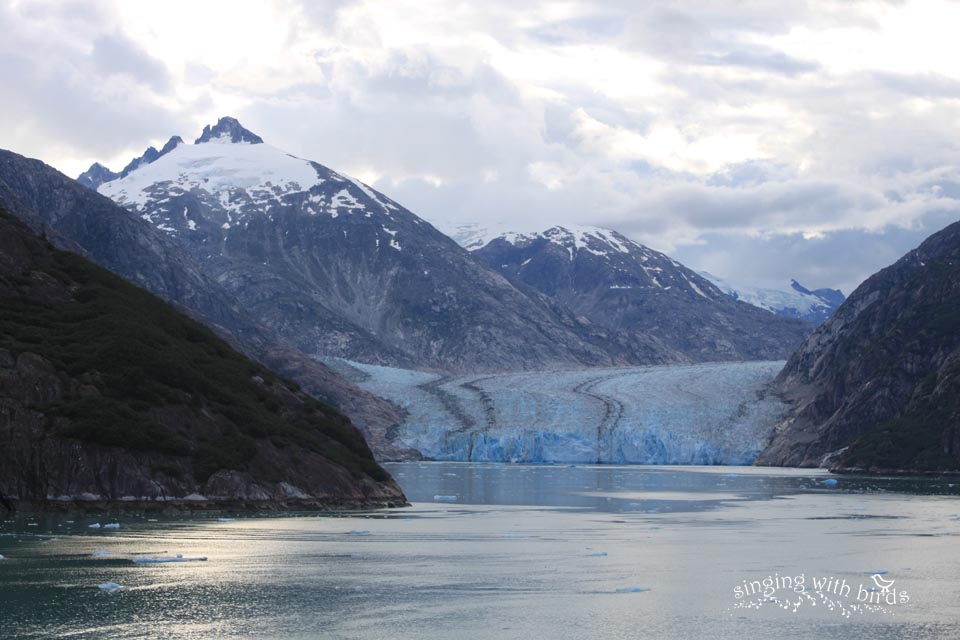 One of the most exciting and impressive days on our Alaskan Cruise began at 4:30 AM. Many of us were up on deck as we headed up the Tracy Arm toward the Sawyer Glaciers.

Tracy Arm is a fjord named after a Civil War general named Benjamin Franklin Tracy. It is located about 45 miles south of Juneau, in the Tongass National Forest. Tracy Arm is the heart of the Tracy Arm-Fords Terror Wilderness, designated by the United States Congress in 1980. 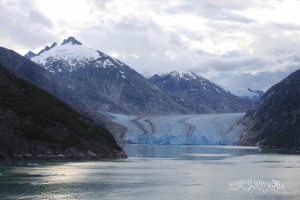 Tracy Arm-Fords Terror Wilderness contains 653,179 acres.  It consists of two deep and narrow fjords: Tracy Arm and Endicott Arm.  Amazingly, our captain spun our ship in a circle 3 times!  We saw impressive waterfalls on both sides of the fjord and so much vegetation. 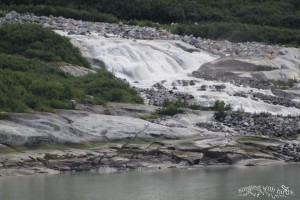 Both fjords are over 30 miles long and one-fifth of their area is covered in ice. During the summer, the fjords have considerable floating ice ranging from hand-sized to pieces as large as a three-story building. The bright blue color of the ice was so beautiful.  We saw large chunks falling and splashing into the water creating a roar.  It was all pretty thrilling! 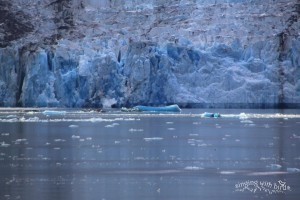 The twin Sawyer Glaciers, North Sawyer and South Sawyer, are located at the end of Tracy Arm.  We actually cruised right up to the end.

A surprising amount of  wildlife in the area includes black and brown bears, deer, wolves, harbor seals, and birds, such as arctic terns and pigeon guillemots. Mountain goats, which are usually found in the higher elevation areas, have been seen near the base of Sawyer Glacier.  We were able to see lots of white soaring birds near the waterfalls and kept an eye out for bear and mountain goats, with no luck! 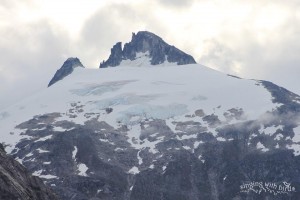 I was so awed by the majestic mountains, the colors and striations in the rock, along with yet another magnificent waterfall. 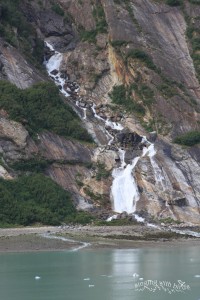 Harbor seals were napping and sunning on ice chunks and dipping and diving into the water.  We saw several of them…kind of a seal’s paradise I think. 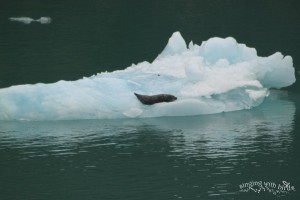 Now on to our last port, I truly fell in love with Victoria.  It’s a remarkable city, with amazingly beautiful harbors and bays.   In 1846 it was renamed Fort Victoria, in honor of Queen Victoria. 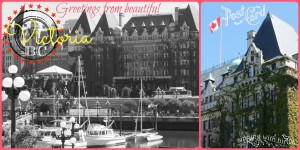 My husband had been to Victoria, but for me it was a first. The British Columbia Parliament Buildings, opened in 1898.  They face the Inner Harbor and sit diagonally across from The Empress Hotel.  I can only imagine how 19 century travelers, arriving by ship, felt as they entered the harbor and were greeted by these 2 grand structures. 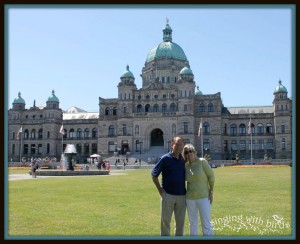 The main dome of the B. C. Parliament Buildings, is topped with a gold-covered statue of Captain George Vancouver.  I was reminded that Victoria is the capital of British Columbia. 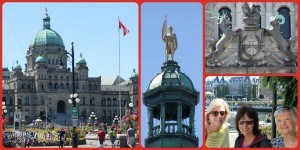 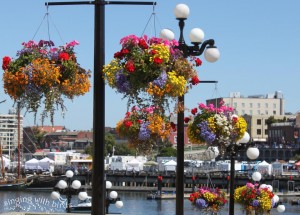 We adored these little yellow, black and white water taxis, shuttling back and forth in the harbor. 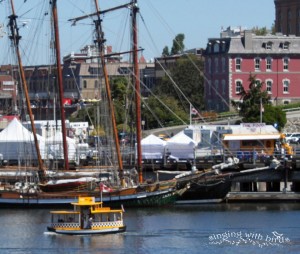 The Fairmont Empress (most commonly known as The Empress) is one of the oldest and most acclaimed hotels in Victoria, British Columbia, Canada.  The Empress is famous for serving Victorian afternoon tea, scones with Empress cream, at $60.00 per person.  It has been designated a National Historic Site of Canada.  Many feel it is the heart and soul of the city. 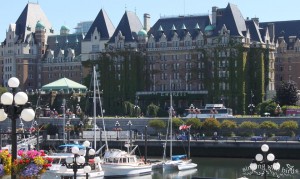 My husband and his sister have wonderful memories of staying at The Empress with their parents when they were young teens. 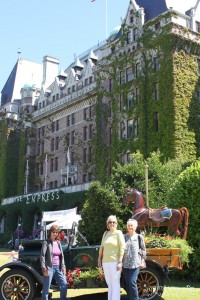 He also remembers his dad taking a picture of he and his sister, Rona, in front of the Mungo Martin House, a “big house.”  It was built by Chief Mungo Martin in 1953.  How I wish I had a copy, but I had fun recreating it after 50+ years. 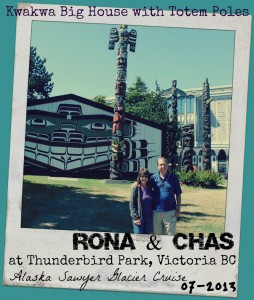 We took a little tour and saw so many charming buildings.  I was smitten by the Old Chinese School, for children in Chinatown.  Notably, Chinatown in Victoria, is the oldest in Canada and second in age only to San Francisco’s in North America, with its beginnings in the mass influx of miners from California to what is now British Columbia in 1858.     We viewed many quaint churches, lovely hotels, and attractive houses. 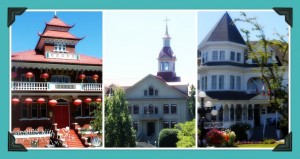 The Trans-Canada Highway, designated as Highway 1 in the four western provinces, begins in Victoria, British Columbia, where the “Mile 0” plaque stands, and passes northward along the east coast of Vancouver Island for 62 miles. 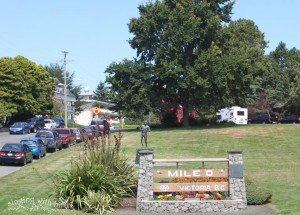 Oak Bay on the far side of the island is where I could have stayed for a week.  With beaches, sailboats and distant snow-capped mountains, this California girl is thinking, “I’d love to go back!” 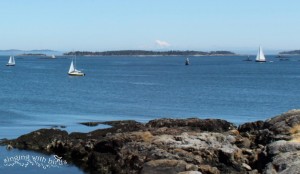 We arrived at the port and boarded our ship.  It was a beauty and we had such a good time. 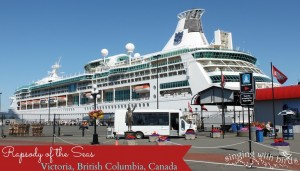 Our final evening in the ship’s dining room together was extra memorable.  We have cruised several times, but not with PT in-charge.  He was exceptional!  Our head waiter, Rosemary, from the Philippines, was terrific.  Kevin, our Assistant waiter was lots of fun.  The three of them made sure our dining together was all it could be for 12…not easy for sure.

Forgive this blurry picture a waiter took.  I take no credit! 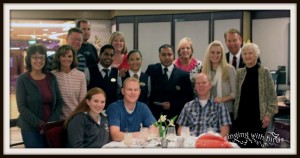 As I am writing today, our daughter is having a new little baby.  My only sadness about the cruise was that K and W couldn’t join us, but we hope there will be many more trips together.  Our cruise was all bought and paid for when they got a sweet surprise just after Christmas!  There is nothing more miraculous or wonderful than a new baby.

We are so happy and thrilled for their sweet family and all of us.  They have two little girls and are adding a boy to the mix.  He is our 14th grandson!  40 years together, amazing kids, and 20 grands, it just doesn’t get better than this for me.

Here’s a favorite picture of K, W, and the girls, at a family wedding. 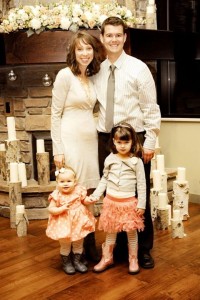 Thanks to my mom, Gege, and my husband’s sister, Rona, who graciously “took their room off their hands,” and stayed together.  They really had a super time together and only met one another at our wedding 40 years ago.  That’s an adventure in itself!  We loved having both of them with us.

Thanks friends for enduring my cruise-along!  I’m working to perfect my Low-carb Double Strawberry Cheesecake, and am hoping to post it next week.  I had a little trouble that I’ll share with you on the first one, lol.  Join me Friday when I’ll be singing about some fun things.  Please come back. 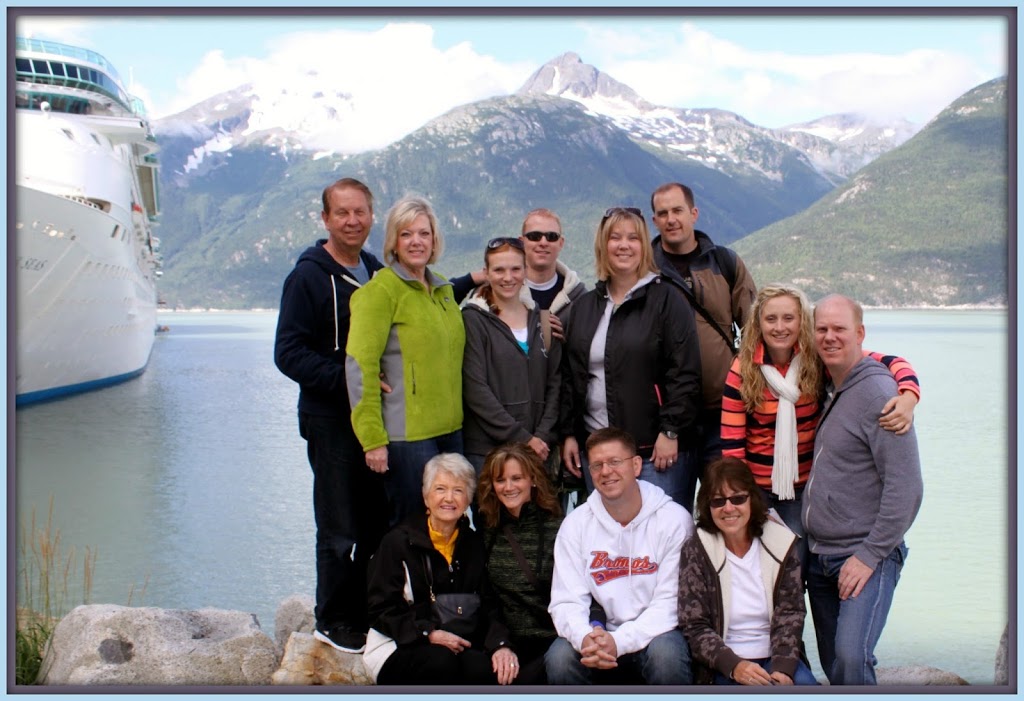 Cruising Thru 40 Years Together, Part 1